T-shirt #226: IF THIS SHIRT IS NOT SWEATY THEN I AM NOT GAMING HARD ENOUGH!! 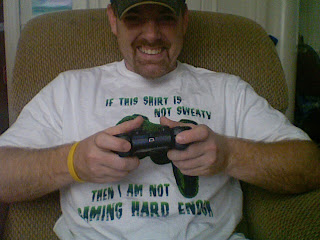 This shirt is another one of many from one of my main contributors (thanks, JB!). I have been playing video games since the early 80’s, did again today, and will be until I can no longer move my fingers on the controller. I think that’s partially a gerenational thing and partially the fact that I don’t want to grow up.

My friend Carl is enjoying some victory potato chips right now, after beating me (Bruins) for the championship in overtime using the Flyers (ouch). For a blog about my favorite all time video games, go here: http://davestshirts.blogspot.com/2010/01/t-shirt-2-video-games.html

I’m sure there will be more video game hockey played today, followed by some late night N64 Mario Kart (Carl for some reason doesn’t like Wii Mario Kart), all with major trash talk going on. I really hope this never gets old…
Posted by Dave McGrath at 5:03 PM