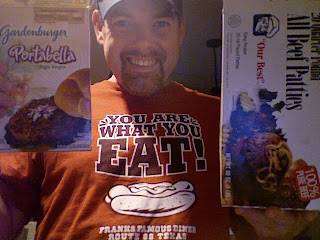 Challenge to anyone reading this: find FRANKS FAMOUS DINER on Route 88 in Texas. I couldn’t.

This is a new shirt that my nephew picked out for me with my sister Carolyn…thanks, you two!

Even though the temptation is there to make many inappropriate jokes about “You are what you eat!”, I will hold back.

For a long time, even with my Crohn’s Disease diagnosis, I did not care what I ate or drank. If I had a bad Crohn’s day, I just dealt with it. I knew certain things set it off, but I liked them too much to stop. When I was drinking (beer especially), I would be in the bathroom the entire next day. Even when I stopped drinking (over 15 years ago), caffeine would take place of alcohol as #1 instigator. But, I needed my coffee in the morning. So again, I dealt with the consequences (usually shaking and jumping in the hallway until I found someone who could cover my classroom so I could relieve myself). My brother Tom got me a “Living with Crohn’s” book one year, and I was excited to see what tips were inside it. Soon after I started reading it I discovered that I was eating and drinking many of the things that were segregated not to eat and drink. I put the book down before finding out any other things I was doing wrong…

Over two years ago, I had to be hospitalized for my Crohn’s. It was the first time that I had to stay over at UMass for my Crohn’s since my diagnosis in 1988, so that was a nice stretch. When I got out of the hospital, I thought it would be a good time to take a look at things I could do to improve my digestive situation. Of course because I was ready to reevaluate, I couldn’t find the book my brother got me. I started exercising more often, and I noticed an improvement. Last year, I decided it was time to cut down on my caffeine intake. No more coffee with caffeine, but the occasional diet soda. Again, I found I was getting less flare ups. I did occasionally have weekends (I blame Carl) where I ate crap and had a lot of soda with caffeine. It was also tough around the holidays because having a lot of sweet things can make my Crohn’s bad. These times I usually had what I call a “Crohn’s Hangover” which is having no energy the next day.

I had always used Crohn’s as a good excuse not to eat vegetables, but the last few weeks I have been using the V8 Fusions to drink my fruits and vegetables (I recommend the blueberry one). And I never thought I would say it, but I have not had any meat in over a week. And don’t be too shocked…I’m sure at some point I will have another hamburger. I am really curious to see A) how long I can go without meat and B) if it will have a huge impact on my Crohn’s.

But I think with or without Crohn’s, what you put in your body really does have a big impact on who you are. If you only put crap in your body, you’re going to feel crappy. If you put good things in your body, you are going to feel better. As I try to find out what diet works best for me and my Crohn’s, I know I will still have bad days. I know I will have days when I say f- it and eat whatever I want. For now though, I am trying to make better eating decisions. I am trying to control my Crohn’s rather than have it control me. It still is hard to hide your Crohn’s away…