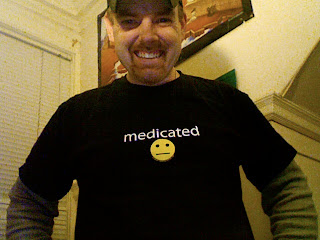 This is one of my many, “We/I saw this, and had to get it for you” t-shirts. That alone automatically makes it one of my favorites. There was no birthday, no Christmas…just thinking of me and my insane t-shirt collection. My friend Krissy got me this, and it usually gets a laugh or a “Yeah, I know” by people that are close to me.

One of the things I take medicine for when things “flare up” is my Crohn’s Disease. I was diagnosed when I was 14 my freshman year in high school. I had been having really bad stomach aches and “intestinal issues” for a few months, but finally I couldn’t take the pain anymore. My grandmother had a suspicion something was wrong with me when I first stopped eating her cooking in the piles and seconds and thirds I was accustomed to. I remember going to pick my older brother up for Winter break his freshman year of college. I could barely stand up straight without my right gut killing, and I didn’t finish the McDonald’s we got on the ride home…a certain sign I needed a doctor.

My regular pediatrician thought my symptoms were just some bad indegestion, and sent me home with mineral oil. As my pain continued, good old reliable Dr. Bob from across the street walked up and gave me an exam and a very needed second opinion. He told me he thought my appendix was about to burst, and that I should go to the ER that night for emergency surgery. I was admitted on the night of December 20, 1988.

In the middle of what should have been a 45 minute appendectomy, the surgeon’s assistant came out and told my parents it was taking longer than they thought. They ended up working on me for over four hours, and taking out about a foot and a half of my intestines. I would later find out that I had Crohn’s Disease, and that I would be in the hospital for Christmas.

Yeah, that sucked. But, I had someone visiting me every day I was in there. And no worries…Santa brought my presents to our house, and my family brought them to me in the hospital (my younger sister was especially concerned about the Santa protocol for a hospital situation). I was in the hospital for Christmas, but I was surrounded by my family. My younger brother gave me a framed Ray Bourque rookie card, so there was no way I was feeling sorry for myself.

I got through the Crohn’s then, and have only had to go back to the hospital once since my first diagnosis. That was two years ago, and you guessed it, my family helped me through it again. Thanks to them for always being there for me, and thank you Krissy for this shirt! More on Crohn's later....