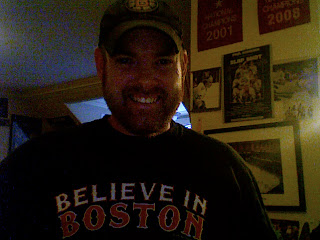 Yup, it’s all about the positive thinking. I got this one during the 2004 Sox season, but tonight my energy will be with The Bruins…

I was thinking today, there are three basic ways people might evaluate their life. There’s the spiritual/emotional, the physical (which is tied to the first), and the financial.

Financially, my life isn’t what you’d call “ideal”. I live from paycheck to paycheck, and when I want to do something that’s rather expensive, I have to plan ahead. Until I win the lottery, sell a script, (which will happen eventually), or find an ideal part-time job, I am willing to continue this way. I tried getting another full-time job in the fall, but my Crohn’s and stress told me I couldn’t do both. Besides, not having a lot of money (obviously) doesn’t bother me…and when I do come into money, my plan is to share it with the people that are most important to me.

Physically, although I can feel my age sometimes, I think I am doing well. My Crohn’s flares up from time to time, but I’ve had over 20 years to get used to that. I go to the gym when I can, still enjoy playing hockey, and can keep up with my nephews and niece (most of the time).

Spiritually and emotionally, I feel rich with little to complain about. I have a loving family and close friends that have been there for me through all of my ups and downs. I have people in my life that I share laughter with every time I see them. They are there to remind me about the important things in life and that (despite what you will read below), it IS just a game. I have a job that I love, time to write every day, and my guitar is always there when I want to play or write a tune. I have music and movies that I love and that have the ability to help me get out of a bad mood. And, I have my sports teams…

No matter how my day goes, they are there to let me forget about the “real world” just about every night. I would have never predicted that by 2010, The Bruins would be the only one of “my teams” that would still be without a championship in my lifetime. I was spoiled with the Celtics in the 80s, and heartbroken in 1986. Then in 2001 the BC Hockey team won it’s first national title since 1949 (a game they led by two goals with two minutes left in the game, but were forced to win in overtime after North Dakota tied it up). After my beloved Eagles let me know what a non-Celtics championship felt like, things got a little crazy. The Pats won the next year and two years later won again. Then in 2004, the Sox made me believe anything is possible. Pats won their third in 2005, and the Sox won again in 2007. Unbefrigginlievable.

Now, we have The Bruins. The B’s. The Black and Gold. The teased me in 1988 and 1990, then lost to Mighty Mario and The Pens in ’91 and ’92. With the outstanding season they had last year, I thought they would at least make the Conference, but they lost to Carolina in game 7 at home in overtime (and yes, I told myself they lost to The Whalers). Then, we come to this year. Injury after injury and replacement of the best goalie from last year. They have stunned me so far, and I hope they continue the ride tonight. Seriously, how can they lose to a team that has freakin’ Carcillo? One last thing about sports teams and The Bruins. If I didn’t have the people in my life to share the thrill of victory and agony of defeat, there would be no purpose in rooting for any of them. Go B’s!!!! BELIEVE!!!!!!