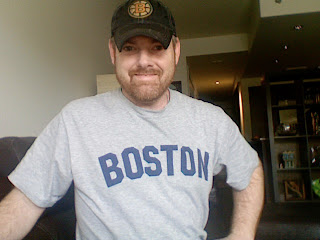 This shirt was part of a yearly tradition of getting a new Red Sox shirt at the start of every season…I think I got this one at Bob’s. I wear it today because it is the last day of my first visit to Portland, the end of an awesome and fun-filled week. What you might not know is that Portland was a coin flip away from being called Boston: When it came time to name their new town, Pettygrove and Lovejoy (the founders) each wanted to name it after his home town. They settled the argument with a coin toss. Pettygrove won, and named it after Portland, Maine; had Lovejoy won, he intended to name it after Boston, Massachusetts (from http://www.portland.com ).

Here are some of the highlights of my trip (other than hanging out with great friends I haven’t seen in months!):

So, my week in Portland is coming to an end. It was a great time and reminded me how lucky I am to have such wonderful friends. I look forward to my next visit…which if The Bruins start losing, may be soon!