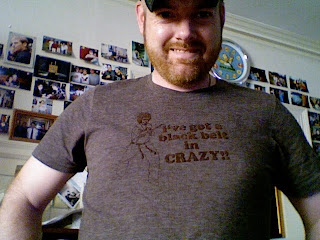 I thought this one would be a hit with my special ed students…it was. I believe this is one of the many Target-less-than-$10 specials in the Dave Line of T-shirts (Maybe Target can help me get to 365?).

This shirt made me think of Scientology, and how they believe mental illness isn’t “real” (see: http://www.mentalhealthmattersnow.com/WHAT_IS_SCIENTOLOGY.html ). I would argue that this notion is crazier than any person with mental issues I have worked with. I would like to see what Tom Cruise would think/say if he visited a program at Westboro State Hospital and saw the differences between a person on and off medication or a person with mental illness before and after they have been in therapy. Are these people just “faking it”, Tom?

We had a homeless and mentally ill guest at Hope Lodge once (he has since passed away). Many of the people here were uncomfortable around him, but I (I’m guessing due to my experience) never had any issues with him. He talked to himself a lot, and anytime he did, I would just start talking to him and he’d stop. I will never forget watching a Bruins game with him when the question I emailed into NESN was answered on the air (I know, “I have a black belt in DORKY!!” should be my shirt). He thought it was so cool that my name and question was on TV.

I guess my point here that even though this shirt is funny, mental illness is real. And, people with mental illness are still people…just like a person with Crohn’s (you may know one) might have trouble digesting something, a person with mental issues has difficulty digesting thoughts (usually do to things someone ELSE did/said to them). What I do know for sure is this. No matter how “crazy” or “sick” someone is, the more love and support they have, the better their chances are for recovery. Telling them their illness is "fake" doesn't help a thing. That, and go Bruins!!!!!