T-shirt #201: RAGE AGAINST THE MACHINE 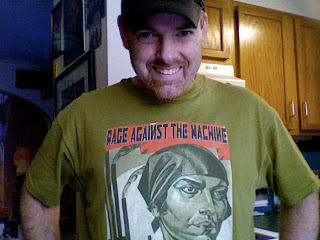 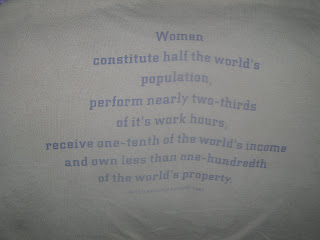 I first remember listening to Rage Against the Machine (www.ratm.com, see band history here: http://en.wikipedia.org/wiki/Rage_Against_the_Machine ) the summer I was going through treatment for cancer. I remember thinking it was one of the coolest names for a band (sorry Carl, Queensryche doesn’t make this list) I had ever heard of and could tell they were angry. It wasn’t until after I was done with chemo that I really started listening to Rage. Recently beating cancer and being introduced to drinking made Rage (along with Pearl Jam) a perfect match to the emotions I needed to release.

RATM’s music doesn’t just blindly say f- the world. They rage about issues that are important to them and try to move people to fight for social justice. My favorite off of their first album, which had a picture of Thích Quảng Đức (http://www.quangduc.com/BoTatQuangDuc/01selfimmolation.html ) on it, is “Know Your Enemy”:

In addition to bringing issues to light through their music, Rage also helps fans get more involved in trying to make the world a better place. In 2002 their guitarist Tom Morello co-founded Axis of Justice (www.axisofjustice.net), a non-profit organization that brings together musicians, fans of music, and grassroots political organizations to fight for social justice.

Rage knows the world sucks and I admire them for trying to do something about it…I think it really is time to “Take the Power Back”:

“Holes in our spirit causin' tears and fears

Yeah, we need to check the interior

Of the system that cares about only one culture

And that is why

We gotta take the power back!” -RATM