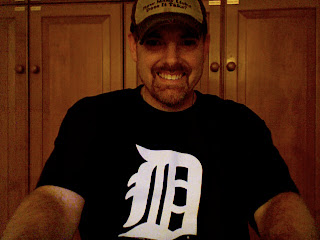 This shirt was another JB donation (thanks, again!) and marks the first time I am watching a Red Sox game and wearing a shirt from another team (surprisingly, the world has kept spinning but the Sox are losing badly).

So, what do I think of when I think of Detroit? I know it has been called Motor City and Hockeytown. I know it’s in Michigan and I know a few people from that area…

The only reason I have this shier in the first place is because a very supportive Michigan native (Michagonian?) gave it to me along with about 6 others. She has supported me with shirts, with reading my works, and just being “wicked cool” in general…I am glad she ended up in “Wushtah”!

I met another person from Michigan while working as a camp counselor at Haverford College. She was a huge Red Wings fan and wore her 1997 Stanley Cup Champions shirt on the tour of the Philadelphia Flyers rink that I set up (the Wings had just beat the Flyers that year for the championship). We kept in touch over the years, and I remember being very jealous when she told me she was going to the outdoor hockey game between Michigan and Michigan State.

Speaking of Michigan hockey, they broke my heart in 1998. My beloved BC Eagles team made it into the championship game (which was played at the Fleet Center in Boston) against Michigan, a game my friends and I were lucky enough to get tickets to. The game went into overtime after BC gave up a 3rd period lead, and if you want to hear the rest of the story, you can watch it here:

A happier sports story more directly related to this shirt is the story of the 1968 Detroit Tigers. The summer of 1967 in Detroit was lowlighted by 5 days of race riots that resulted in 43 people being killed (www.67riots.rutgers.edu/d_index.htm ). The 1968 Tigers helped to heal the city the following summer and went on to win the World Series that year (info about the movie based on it here: www.imdb.com/title/tt0343535).

Although the list on Wikipedia is extensive (http://en.wikipedia.org/wiki/List_of_people_from_Detroit), the only people that come to mind when I think of Detroit are Eminem and Kid Rock. Although I would hardly call them heroes, there are a few of there songs I really enjoy. As I was finishing up this blog, a real Detroit hero walked in the room. One of the guests here is from Detroit and he’s dealing with illness and he’s still laughing. We often hear about celebrities “courageously fighting” a disease and becoming heroes for others that are similarly afflicted. One of the blessings of my job is that I get to work with everyday heroes every night. Here’s one for all the Detroit/Michigan people that I know. A little Kid Rock with a PJ twist…