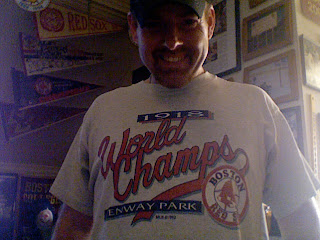 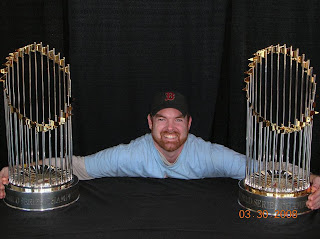 Even though sportswise the Bruins are my true love, the Red Sox are my first love. And they were the first team to break my heart. As many Sox fans know, it was October 25, 1986. It was game 6 of the World Series, and my beloved team was ahead 3 games to 2. In the top of the 10th inning the Red Sox got two runs and it looked like it was finally time for The Curse to be broken. In the bottom of the 10th inning, the first two Mets got out. So the Sox were ahead 5-3 with 2 out and no one on base. I’ll spare the details, but let’s just say I (along with every other true Sox fan) went to bed crying that night and knowing that they would not win game 7. One of my first life lessons was a rather cruel one: No matter how close you come to something, it can slip through your fingers like the ball slipped out of Stanley’s hand. I never blamed Buckner, and always turned my head away anytime a replay was shown on TV.

After not winning a single playoff game in 1988 and 1990, I thought better postseason preparation was in order. Starting in 1995 (when I bought this shirt at Fenway), I started a tradition of re-reading Dan Shaughnessy’s One Strike Away every year when it looked like the Red Sox were going to make the playoffs. I also got this shirt that year as a reminder that not only had it been since 1918, this was most likely the only Sox championship shirt I would ever own. I told myself it would help me prepare for the worst and not get “too excited” that the Sox were going to be in the post season. Although it helped leading up to the playoffs, excitement and hope tried to take over once that first Divisional Series pitch was thrown. And in 1995, the Sox got swept again (setting an MLB record for most playoff games without a win).

The Bo Sox finally won a playoff game in 1998 (game 1 against the Indians), but lost the next 3 and were out. They made it to the American League Series in 1999, but only managed to win one game against the NYF’N Yankees. Four years later they played the Yankees again, winning game 6 and leading in game 7. When the “Yankmes” tied it, my instincts took over. I turned the game off, went out to my car, and drove around aimlessly while listening to the rest of the game on the radio. So I never saw what Boone did, and turned my head away for any replay.

All of the heartache and heartbreak was washed away in 2004. This team made history, and made everything worth it. I was able (for the first time since 1986) to watch Buckner’s error and (for the first time ever) to watch Boone’s homerun. I talked to both of my brothers the night they won, asking them if in fact it really happened. Somehow, it did.

A lot of fans, sportscasters, and writers speculated that if the Red Sox ever won the World Series, the interest and passion in the team would fade away. They have continued to sell out every game at Fenway going back to May 15, 2003. They did it AGAIN in 2007 (see picture with both trophies at The Centrum in Worcester). Red Sox Nation grew in numbers and pride, and fandom was passed on to another generation. Although I would argue my brother’s kids were baptized into the Church of Fenway a lot more easily than the rest of the family, the dedication is still there. Today, when I took my older nephew out for ice cream (Uhlman’s, of course!), he told me that he was on the computer for half an hour last night voting to get “Youk” on the All-star team.

Although 2004 and 2007 were beyond belief, they didn’t change how I want each season to end. No matter what place the Sox are in, no matter how many players are injured, no matter what the score is, I always want the Sox to win the World Series. The only difference now is that if they Sox don’t make the playoffs or lose in the playoffs, I can look at pictures and watch videos from ’04 and ’07 instead of agonizing over the “how come they keep doing this?” questions all winter long. This shirt may not be as much of a joke as it was when I got it, but it takes nothing away from my first love. And loving the Sox will never get old…