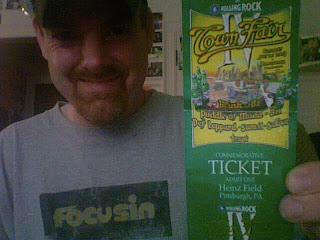 This is my 3rd Focusin shirt (see also: http://davestshirts.blogspot.com/2010/02/t-shirt-59-focusin.html, http://davestshirts.blogspot.com/2010/04/t-shirt-115-focusin-heavens-to.html) , and another homemade one. This shirt was also one of the reasons I was dubbed “#1 fan” after I made it and wore it to a Focusin show on a Sunday night in JP. I wear it today for my friend Glen, who is celebrating his somethingth birthday today (hint: it’s one less than the number that gets Dante so upset in Clerks).

Although Glen and I grew up together in The ‘Boro (a.k.a. Westboro, MA a.k.a. birthplace of Eli Whitney), we really didn’t start hanging out until our high school years. Our girlfriends both went to Notre Dame in Worcester, so we went on our share of double dates. This continued during my bout with cancer, when Glen and the girlfriends helped me feel “normal” by going to Hampton Beach and the Red Sox with me. Although we didn’t hang out as much during our college years, we started hanging out a lot more in the late 90s / early 2000s.

I will never forget when Glen called me in June of 2001. There was something different in his voice like he didn’t believe what he was telling me. He had gone to see U2 the night before, and they brought him up on stage to play a song with them. You can see the pictures here http://www.2dorks.com/gallery/2009/0507-u2/index.shtml

and read the story here http://www.elevation-tour.com/article107.html

It was later that year that Glen started playing in Focusin. I went to every show I could and had a pretty legitimate excuse when I finally missed one (I was in the hospital getting morphine for my first kidney stone). I supported Focusin through their first year together and happily handed out their CDs at the shows.

In 2003, Glen and the band provided me with a very needed distraction during one of the toughest times in my life. I had recently become un-engaged, and Focusin was rocking their way in a national battle of the bands. They won the Boston final, and won themselves a trip to Pittsburgh with the opportunity of being national champs. I remember driving down with my friend Matt and being pulled over about 24 seconds into our trip (we got off with a warning). I also took a sweet video of Matt lip syncing Danger Danger’s “I Still Think About You” (no, that is not a typo). We met our friend Mike there, and watched as Glen and the boys beat band after band to win it all. The grand prize was being the opening band for a concert at Heinz Field (where the Steelers play) that featured (as you can see on the ticket) Blink 182, Puddle of Mudd, 311, Def Leppard, Sum 41, Saliva, and Trapt. Pretty amazing, and just what I needed at the time.

That fall, Glen started teaching me how to play guitar. We met weekly and I practiced just about every day. It wasn’t long before I could play a few chords and we were actually “jamming”. Although my strumming skills seemed to have plateaued, I did learn how to play Everlong acoustically (my goal when I first started) and still enjoy learning and attempting to write new songs. It’s a gift that I can’t say thank you enough for, and one I will have for the rest of my life.

That fall also brings to mind something else Glen and I have in common: a love for the Red Sox. Although I never saw Boone’s HR in game 7 that year (I had decided to drive around in my car after the NY Jerks tied it up), Glen was at a bar and witnessed the atrocity. He then (as the story has been told) walked out of the bar, threw his Sox hat on the pavement, and kicked it all the way back as he walked home. For some reason Glen and I decided to go to even MORE games the following year, and it paid off (you can thank us).

Whether Glen and I are playing music, going to concerts, playing video games, playing Wiffle Ball, or watching the Sox, one thing is for sure: we are always making each other laugh. He has been there for me through my tough times, and recently has gone above and beyond what the title “friend” usually implies. Before he moved out to Oregon with his wife Krissy, he GAVE me the MacBook I am typing on right now (not to mention an iPhone and a snowboard!). I know I have embarrassed him much more than he wants, but I can’t help but feel lucky to have him as a friend. Hope your birthday is an awesome one, buddy!