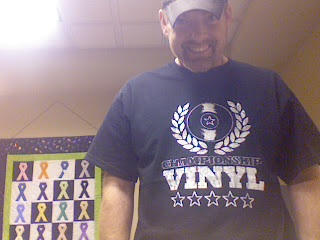 This shirt was donated to me (all the way from the UK!) from Last Exit To Nowhere (www.lastexittonowhere.com/shop/product/championship-vinyl), and is the name of the record store from the movie High Fidelity (www.imdb.com/title/tt0146882/).

This movie (based on the book by Nick Hornby) is definitely one of my favorites. John Cusack stars as Rob Gordon, the owner of Championship Vinyl. Rob has just been dumped by his girlfriend, and he recounts his “Top 5” breakup stories while deciding to reach out to his ex-girlfriends in search for the reasons why things didn’t work out. In addition to Cusack’s great portrayal of a “tragic comic”, Jack Black plays a hilarious employee of the record store. The movie’s soundtrack is also amazing, and I can definitely relate to the scene where Rob organizes his music autobiographically!

If you haven’t checked it out, I would put it on your Netflix list, or check it out at Hulu (www.hulu.com/search?query=High+Fidelity&st=0).