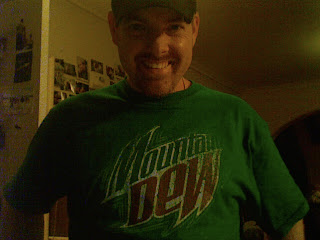 This shirt is yet another part of an awesome donation from an awesome person (thanks, JB!).

I was never really that into Mountain Dew growing up. Coke was always my #1 choice when it came to soda, and I was sure New Coke was going to fail miserably (why change something so perfect?). I always liked getting Coke on Prince Edward Island in the summer because it came in glass bottles. And when I ordered at McDonald’s (breakfast, lunch, or dinner), Coke was what I got. I even shot-gunned a can of Coke behind Mini Farms after my friends (a.k.a. co-workers) dared me to (it kinda hurt, but I got it down).

Then in high school, I did what any good Catholic boy would: I gave up Coke for Lent. It was a difficult 40 days, but a period that would lead me to another confectionary savior: Mountain Dew. There was no way I would drink Pepsi instead of Coke and mello yello was not in any Massachusetts store I knew of, so “The Dew” was where I ended up getting my sugar fix. I gave up drinking Coke each year after that, and Mountain Dew was there to see me through it.

Mountain Dew then became part of my “diet” after that, and I would usually pick up a few 2 liters of Coke and The Dew when I went shopping. Then in the fall of 2002, I stopped drinking soda and caffeine altogether. I drank flavored water instead, hoping it would help with my Crohn’s. A few weeks later, I thought I must have been sitting in the wrong position on my couch because my back stared hurting. Five minutes later I was banging on my roommate’s bedroom door telling him he had to take me to the hospital. It turned out I was having my first kidney stone, a pain that was worse than any chemotherapy I had ever gotten. I took it as the perfect opportunity to get back on my old diet, so Coke and The Dew were back.

I don’t think it was until 2004 when I saw Supersize Me that I cut out regular Coke and Mountain Dew (in addition to McDonald’s, Burger King, Wendy’s, Subway, etc.) from my consuming. It took me a while, but I actually got used to Diet Coke and Diet Dew. I would (and still do) sneak a regular one in here and there as a “treat”, but they tasted more like syrup to me than soda.

After admitting that my Crohn’s was no match to caffeine, I actually have since cut out regular coffee and tried to only drink caffeine free soda (a hard thing to do). I do still have on occasional Diet Coke or Diet Dew, but more often than not it ends up coming back to literally bite me in the ass. I know one day I will most likely stop drinking soda, but that day is not today…