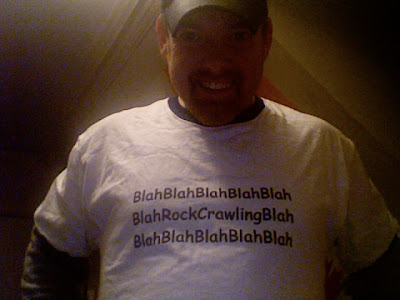 Okay, I admit it. Before today, I had no idea what Rock Crawling was. Lucky, Google and my friend Christi (who donated this t-shirt) helped me, and now I will show you…

Rock crawling is about slow-speed, careful and precise driving, and high torque generated through large gear reductions in the vehicles drivetrain. Rock crawlers often drive up, down and across obstacles that would appear impassable. Such vehicles to rock climb are primarily 4x4s.

Here are some visuals:

And believe it or not, there is even a site for the World Extreme Rockcrawling Championship Series: http://www.werocklive.com

It took a while for this to load, but there is a rock crawler game here: http://www.flashracingonline.com/node/1098/play

So, now you can go and ask people if they have ever heard of rock crawling. And when they say “no”, you can tell them all about it.